You are here: Home / News / Ernst returns from meetings in Germany, Poland to discuss Ukraine 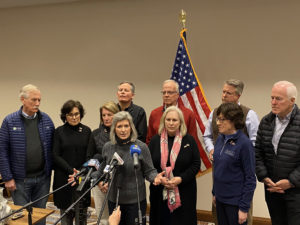 Senator Ernst with members of the delegation. (photo from Ernst’s Twitter feed.)

Iowa Senator Joni Ernst has just returned after leading a weekend trip to Germany and Poland where she and nine other U.S. Senators met with government officials, refugee organizations and U.S. military commanders in Europe.

She said the U.S. must send more lethal aid to Ukraine. “There is no time to waste,” Ernst said during a conference call with Iowa reporters. “Every second counts in war.”

It’s the second bipartisan group of Senators to travel to the region in the past week. Ernst said her group met with Ukrainian refugees as well.

“They were rightly concerned by the pace and the flow of lethal aid that Congress has passed and the president has been announcing over the past week,” Ernst said. “Washington bureaucracy is once again slowing the process down.”

Ernst said the U.S. and its NATO allies must figure out a way to get the Russian made fighter jets Poland has offered to Ukraine and to then equip Poland with American-made F-16s. The delegation also discussed whether the U.S. should set up a speedier process to accept refugees from Ukraine, but Ernst said that doesn’t seem to be needed right now.

“What we have heard from many of those Ukrainian refugees is that they hope to stay close to Ukraine,” Ernst said. “…They are hopeful that the Ukraine will win this war and then they can return home or what may be left of their home communities. Many of them are very adamant about that. They wouldn’t have left if it had been safe.”

Ernst, who is a member of the Senate Armed Services Committee, said Vladimir Putin is a war criminal and should be held to account by the International Criminal Court.

But Ernst told reporters the focus now should be on helping Ukraine win the war.