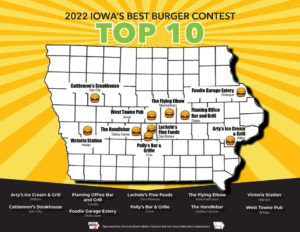 The nominating phase is over and the selection process is underway in the annual contest to name “Iowa Best Burger.”

The Iowa Beef Industry Council conducts the contest and spokesperson Kylie Peterson says they are down to the top ten. “We have a secret panel of judges who are visiting each of the locations and then those judges will pick the winner, and we will announce it on May 2nd, for May Beef Month,” Peterson says. She says they had 5,400 votes from 265 cities and towns across Iowa which had burgers nominated.

Now the judges will single out one of the final ten. “They are looking for a burger that is a 100 percent real beef patty served on a bun or bread product. Any combination of condiments can be added to the burger and any toppings can be added to the burger — spices you name it,” Peterson says, “but basically the burgers are being judged based on the taste of the beef patty, the appearance, and the cooking temperature of a 160 degrees.”

Peterson says judges can have several options to test when they visit the finalists. “Every patty is the same for burgers at these restaurants, so the judges are going there and just choosing one of the burgers off the menu. But then ultimately, whoever is chosen as the winner will decide which burger they want to be considered as the Best Burger in Iowa,” according to Peterson.

Eight of the top ten establishments are making their first appearance in the contest. She says it’s nice to spread the love around the state and the number of votes each place receives is what determines if they make it as a finalist. Bambino’s of Ossian took home the title last year.