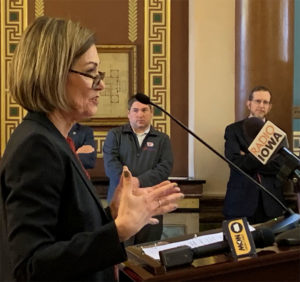 Governor Kim Reynolds says the U.S. Supreme Court is “on the brink” of overturning Roe v Wade, the ruling that legalized abortion, but she says banning the procedure in Iowa requires a “complex” set of moves.

“There’s never been a more important moment in the history of the pro-life movement,” Reynolds said during a rally in the statehouse rotunda. “Decades of organizing, voting and above all praying are paying off.”

The U.S. Supreme Court is expected to issue a ruling this summer on a Mississippi law that bars abortions after 15 weeks of pregnancy. Reynolds cautions Iowa cannot adopt a similar law here under current conditions. 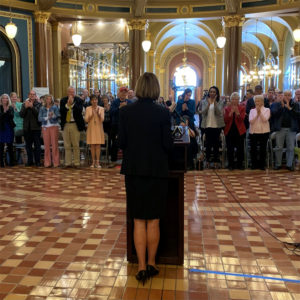 Governor Reynolds speaks to the crowd in the Capitol rotunda. (RI photo)

Reynolds has appointed a majority of the Iowa Supreme Court’s justices. She’s asking the court to overturn a 2018 ruling that said women have a right to an abortion under IOWA’s constitution. Reynolds also is backing a proposed constitutional amendment that says the state’s constitution does not guarantee abortion rights.

“As a movement we’re closer than ever to one of our foremost goals,” Reynolds said. “…I won’t rest until our laws and our society recognize that all people, no matter how small, are entitled to the right to life.”

Planned Parenthood Advocates of Iowa says there’s a long fight ahead to keep abortion rights in Iowa. The group says if Reynolds is reelected in November, there is “a very real possibility abortion will be outlawed in a few short years.”