You are here: Home / News / Sites at nature area in Linn County named to National Register of Historic Places 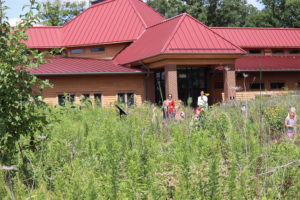 Six sites at the Wickiup Hill Nature Area managed by Linn County Conservation have been added to the National Register of Historic Places.

Kent Rector manages the Wickiup Hill Learning Center on the site northwest of Cedar Rapids.
“It’s kind of exciting, it allows an additional layer of protection to the sites. It expresses the value as far as archeological potential and significance that the sites contain — both archeologically and historically,” Rector says.

Rector says the listing is part of an ongoing effort to study the historical significance of the area. “The Linn County Historical Preservation Commission actually kind of spearheaded that whole process and it was a lot of research compiling site files, site information, proving significance and importance. So, there is some additional research into the sites as far as structural significance for what that would tell for future investigations,” Rector says.

He says all that information was used to nominate the sites for the national list. “So, a lot of planning, a lot of research, and a lot of commitment to these sites to get this passed,” he says. There is a total of 751 acres that include the Wickiup Hill Natural Area.