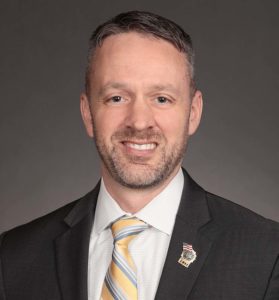 The chairman of the Iowa Senate’s tax-writing committee is proposing a constitutional amendment that would require a super majority vote in the legislature to raise the state income tax or the sales tax.

“Politics change over time. How do Iowans make sure that their tax rates aren’t subject to the whims of the populace? So the premise is simple here: it should be a majority to lower the taxes,” Dawson said, “but there should be some type of higher threshold to raise them here in the state of Iowa.”

The proposed amendment would require a two-thirds vote in the House and the Senate to raise the two major taxes collected by the State of Iowa. Pam Mackey Taylor, a lobbyist for the Sierra Club’s Iowa chapter, said that would make it “almost impossible” to raise taxes.

Victoria Sinclair is a lobbyist Iowans for Tax Relief, a group that’s been seeking constitutional limits on state spending for decades. The group also supports this proposal to require a larger majority of legislators to support raising taxes.

“One no vote is worth two yes votes,” Owen said. “Try explaining that in social studies class.”

According to the National Conference of State Legislatures, a two-fifths or two-thirds majority is required in the legislatures in 15 states to raise taxes or impose new taxes. If Dawson’s proposal clears every legislative hurdle, the earliest Iowa voters would see a similar proposal for Iowa’s constitution would be in 2024 General Election ballot.