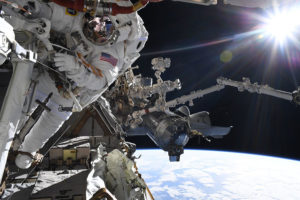 Raja Chair outside the ISS. (photo from NASA video)

Iowa astronaut Raja Chari is working outside the International Space Station at this hour. The Cedar Falls native is on his second spacewalk.

Chari is on the EVA, or extravehicular activity, with German astronaut Matthias Maurer. The first hour of the EVA was spent getting Mauer untangled from tethers and securing his helmet camera and light.
Chari is spending the majority of the spacewalk attached to the end of the robotic arm while his European Space Agency teammate is moving around on the station’s exterior, performing several tasks.

As heard on NASA-TV, Chari was attaching his boots to the robotic arm and commented to Mission 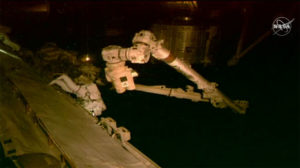 Chari prepares to attach his boots to the robotic arm. (photo from NASA TV feed)

Control about how smoothly things are going as he’d learned important lessons on his first spacewalk — last Tuesday.

NASA says the main mission of the spacewalk is to install a thermal system along with various electronic components on the outside of the space station, orbiting some 250 miles above the Earth. Astronauts Kayla Barron and Tom Marshburn are operating the robotic arm from inside, “flying” Chari to various destinations on the station’s exterior.

Marshburn is heard powering up the arm to move Chari as Mission Control comments that “Raja is having a chance to fly the smooth and friendly skies of Kayla and Tom,” to which Chari responds, “Absolutely. I hope that it’s business class.”

The spacewalk got underway before 8 a.m. Central Time and it’s expected to last about six-and-a-half hours. The ISS is moving at 17,500 miles an hour, so Chari will see at least four sunrises and sunsets during his jaunt in the vacuum of space.