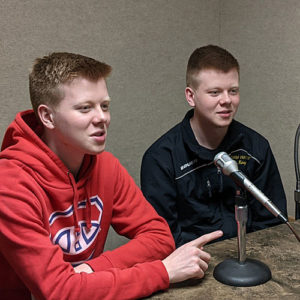 Twin brothers from northwest Iowa will be featured in a new national TV show tonight.

Alex and Derek Koops of Sioux Center will be competing on “Domino Masters” on FOX. Four teams get 16 hours to complete a domino build that is based on a common theme each team must try to depict.

“It’s not just your every day just lines and turns and spirals. We’re building structures. We’re building portraits out of dominoes,” Alex Koops said. “It’s super complex and it just makes it that much more entertaining to watch.”

The twins have been setting up and knocking over dominoes since they were ten-years-old, but they upped their game after seeing an episode of “America’s Got Talent” and watching a contestant build contraptions with random items, like popsicle sticks and dominoes.

“We eventually found domino videos online through this and we were like: ‘O.K., I think we can do this ourselves,'” Alex Koops said.

The twins started a YouTube channel called Daks Dominoes and it now has 200,000 subscribers and 40 million total views. That caught the attention of the show’s producers. FOX flew the twins to Los Angeles last summer to film the show. The set was built in an aircraft hangar to accommodate the four 26 square-foot raised platforms where each team creates their build. There’s also a platform for the judges.

The brothers say there were at least a million dominoes in every imaginable color in a back room, plus woodworking tools and other materials for their creations. Their favorite part of the show is what everyone sees at the end.

“The topple days were definitely the funnest part,” Alex Koops said. “Being able to not only cheer on your own build, but cheer on every other team’s build, it was just really exciting. Although we were competing against each other, there was a lot of camaraderie between the teams as well and it was really fun to be able to meet new people and make new friends.”

All the contestants stayed in the same hotel. FOX told the contestants that if anyone contracted COVID, that team would be eliminated, so the socializing was mainly in their hotel, with a few excursions out to eat. While filming, stress was an ever present factor.

The other stressful element was the production side of the competition. “With lights everywhere, cameras everywhere, the judges are walking around sometimes talking to the builders,” Derek Koops said, “it was definitely something new to get used to.”

Domino Masters airs on Wednesdays at 8 p.m. on FOX. The twins are not revealing whether they are declared the winners in tonight’s episode.