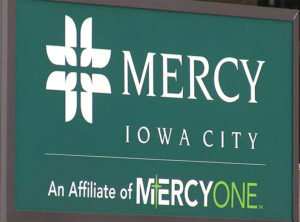 A jury has approved a more than $97 million verdict for an Iowa City couple after their child was born severely brain damaged. Geoffery Fieger, the attorney for Andrew and Kathleen Kromphardt, told KCRG TV the baby received brain damage after he says the doctor neglected to take care of the mom during birth.

“For a period of about two hours while her baby was in fetal distress. And when she finally returned to the mom’s side — it was a panic situation,” he says. The lawsuit says there were ample signs a cesarean section was necessary at the time of the birth in 2018, but Doctor Jill Goodman continued with the vaginal birth and used forceps and tried to pull the baby out of the womb and fractured his skull. Fieger says when she couldn’t get the baby out with forceps, she used a vacuum extractor — which he says you’re never supposed to do after failed forceps.

The is believed to be the largest award in state history for medical malpractice cases. The largest portion of the award will go for future medical costs for the child. The verdict will be split evenly between the doctor’s office and Mercy Iowa City, and includes $42 million for future medical or care expenses. “This is the amount of money that it will take to care for him — and that is what the jury awarded,” Fieger told KCRG TV.  The jury award also included  $11.6 million for loss of future earnings, and $20 million each for pain and suffering and loss of function of the mind and or body.

Mercy Iowa City released a statement saying: “Mercy Iowa City is disappointed in the verdict. While we respect the legal process, we disagree with the jury’s conclusion and will consider all available options. Our primary focus remains on providing high-quality care to our patients and families.”

Obstetric and Gynecologic Associates of Iowa City and Coralville legal team also released a statement saying: “While we have great respect for the legal process, we are disappointed in the jury’s finding. We are reviewing our legal options moving forward.”