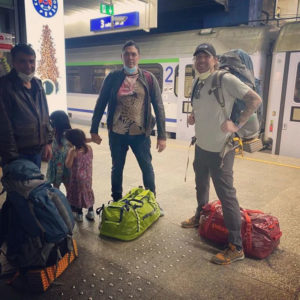 The Beckers. (photo courtesy of the Beckers)

A father and son from Iowa are back in the state after a medical mission to war-torn Ukraine.

Charlie Becker, of Monticello, says he and his son Dr. Chad Becker, of Ankeny, took off a week ago with 200 pounds of medical supplies.

“We came on Monday and we left on Thursday so it was a very short time because a couple of our objectives didn’t work out,” Becker says. “Our main thing is we got in with medical supplies and with food and other things — mission accomplished.”

Chad Becker works as an Emergency Room doctor in hospitals in Des Moines and Grinnell and he was in contact with a hospital official in Ukraine as to what items were most needed. Their first stop was in Poland and Charlie Becker offered praises for the Polish people for the way they’ve taken in Ukrainians fleeing the war.

“They were able to absorb more than two-million people and you saw no signs of it whatsoever,” he says. “There were no people in the streets or people begging or people doing anything. They just absorbed these people and took them in like they were family.”

There is more information on how you can help those in Ukraine on Chad Becker’s Facebook page.