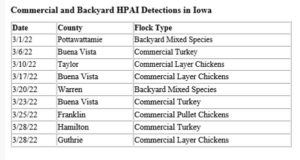 Two more commercial bird flocks have been confirmed with the avian flu.

“We are now at nine cases total in the state of Iowa, two backyard flocks, seven commercial operations,” Naig says. Naig says this year’s outbreak is a little different than the major one in 2015.

“What’s notable about what is happening this year is there is a strong indication that the virus is being carried in the wild bird population. That what we are seeing largely across the entire country — starting on the East Coast and now moving into the Midwest — is that these are independent wild bird introductions into these operations,” according to Naig.

Naig says it does not appear there is any facility to facility spread now and they want to keep it that way.
He says it remains important for producers to closely monitor the animals and report any signs of the disease immediately. Information on the disease is available at IowaAgriculture.gov.

State Veterinarian Jeff Kaisand says protocol requires the birds to be destroyed within 24 hours once the bird flu has been detected. He says they start talking with producers about what type of depopulation method they want to use at the first signs that they may have an infection and then work with them to carry it through.

Kaisan says they so far have been able to meet the 24-hour timeline. “They’re doing it on-site and we are not moving anything bird wise from an infected site,” he says. Kaisand says they are monitoring the wild bird migration as part of their efforts.

“There’s some days when there’s a lot of movement and when it gets cold there is a little bit of stall out. And some days there’s movement in different directions. We are all hopeful that it moves through quickly and we get to warmer weather. But it all depends on the weather and how quickly they move,” Kaisand says. More than seven million birds have now been impacted.