You are here: Home / News / Donated bulletproof vests and helmets from Iowa being shipped to Ukraine 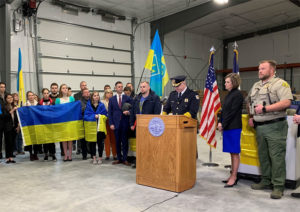 Eighteen Iowa law enforcement agencies have donated more than 700 bulletproof vests and nearly 150 helmets for shipment to Ukraine. A crowd in an Iowa National Guard warehouse watched as the last few crates of protective gear were loaded in a truck.

“This has been an incredible team effort from the start and I’m proud to say that help is on the way for Ukraine from Iowa,” Governor Kim Reynolds said.

Authorities from Cherkasy, Iowa’s sister-state in Ukraine, put bullet-resisting helmets and body armor vests on their list of desperately needed supplies, according to the governor. Several Ukrainians, some waving or wearing their home country’s flag, joined the governor today.. Taras Slyvka left Ukraine seven years ago after Russia’s capture of a southeast region of Ukraine.

“The war didn’t actually start a month ago and this war didn’t even start eight years ago,” Slyvka said. “This war of Russia against Ukraine and the Ukrainian nation is continuing already for 400 years.” 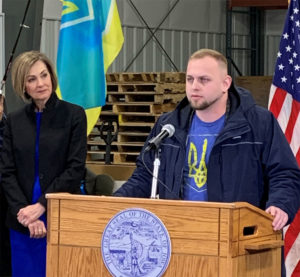 Slyvka is a design engineer for John Deere’s Dubuque Works and helped make some of the arrangements for the shipment of protective gear from Iowa along with contributions from Nebraska. The shirt Slyvka wore to the event had a Ukrainian emblem on the front, with a motto he said translates into one English word: freedom.

The governor said today’s event is the “kick-off” of state efforts to aid Ukraine. “That a free people can be threatened at the whim of an evil tyrant should be unthinkable today,” Reynolds said, “But Putin now faces a force that he didn’t expect: the spirit of the Ukrainian people and their unwavering commitment to democracy and freedom.”

Law enforcement officials like Pottawattamie County Sheriff Andrew Brown say once a protective vest or helmet reaches the manufacturer’s recommended end date for use, the gear is retired and put in storage.

“It generally would cost us thousands of dollars to have our equipment destroyed properly,” he said. “The reason we pay for disposal is because we just simply don’t want to just throw it away…it could wind up in the wrong hands on our streets.”

Iowa Public Safety Commissioner Steve Bayens said this shipment of ballistic vests and protective helmets can still save lives. “Once we learned the plight and the needs of the Ukrainian people, it was immediately apparent we could put our decommissioned equipment to good use,” Bayens said.

The governor indicated state officials are hoping to coordinate volunteer efforts to send meal kits to Ukraine and Reynolds has notified federal officials Iowa would accept refugees from Ukraine.