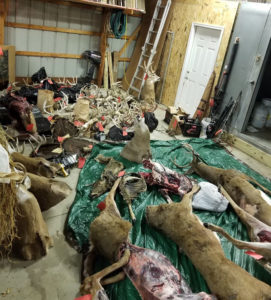 A DNR investigation has led to 48 wildlife charges against five people from western Iowa with nearly $83,000 in fines and liquidated damages.

State Conservation officer, Kirby Bragg, says it started with a warrant to search the home of 26-year-old Devon Lewis of rural Washta. “Initially, we were going in on an illegal wild turkey as the basis for the search warrant. And then doing that search warrant we came across activity in plain view of illegal activity — which led to another search warrant,” Bragg explains.

They eventually recovered many animals that had been taken illegally — including some 70 deer.
“They were going for the antlers. But it involved numerous wild turkeys we found illegal red fox, ducks. They were shooting ducks in the springtime when they are pretty, this time of year, when they are in their mating plumage,” he says.

Officers found evidence that poaching was a year-round network dating back to at least 2018. While poachers often sell the animals they take, officer Bragg says that wasn’t the case here. “No, I’m not sure what the end goal was. They had a Facebook group, like a hunting, outdoors Facebook group and they were posting a lot of photos on the Facebook group. But no, no evidence of them selling or profiting from the illegal behavior,” according to Bragg.

Bragg says this type of thing hurts those who hunt legally. “Unfortunately, a lot of animals, a lot of wild animals were taken away,” he says. The court took 5 rifles, 3 shotguns, and 3 bows used to commit the crimes.