You are here: Home / Military / Navy may pull Sioux City namesake ship out of service 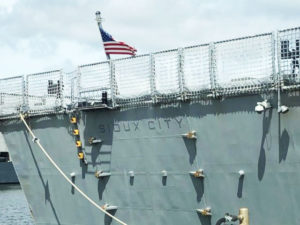 The bow of the USS Sioux City. (KSCJ photo)

The USS Sioux City is among a group of ships the U.S. Navy is considering decommissioning in a budget-cutting move.

The Navy’s plan is to eliminate five cruisers, nine littoral combat ships — including the USS. Sioux City — four landing dock ships, two submarines, two oilers, and two expeditionary transfer docks. That would save the Navy an estimated $3.6 billion over the next few years.

The nine littoral combat ships, including the Sioux City, are the Freedom-class variant, which was found to have a major flaw with its combining gear that transfers power from the ship’s engines to its water jets.