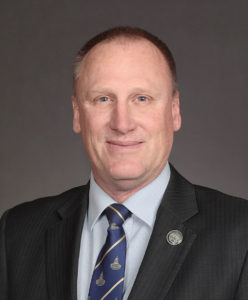 A Senate committee has approved a bill that would send a million dollars in state funding to a private organization operating a crisis pregnancy center. Senator Mark Costello of Imogene and the other Republicans on the Appropriations Committee voted for the bill.

“This is what I call the ‘Mom’s Bill,'” Costello said. “It’s an effort to provide more options for maternal support for mothers who find themselves in unplanned pregnancies.”

Senator Ken Rozenboom, a Republican from Oskaloosa, said he’s the proud father of a son who was given up for adoption by a 16-year-old who got support from this kind of an organization in Kansas City.

“His mother and I are eternally grateful for the opportunity that that young girl was given 35 years ago,” Rozenboom said, choking back tears.

The bill says the goal is to assist pregnant women to choose childbirth rather than abortion. “This is in the public interest,” Rozenboom says. “This will save children.”

Democrats on the committee voted against the proposal. Senator Janet Petersen, a Democrat from Des Moines, said the state should spend more money to keep labor and delivery departments in hospitals open rather than fund crisis pregnancy centers.

“You’re creating a new program that is not evidence based,” Petersen said, “and we’ve seen problems with this with fraud in other parts of the country.”

A spokeswoman for Planned Parenthood Advocates of Iowa said Crisis Pregnancy Centers prey on vulnerable women and have been known to shame and scare women planning to seek an abortion.

The second half of the bill — which has bipartisan support — would require the state’s Medicaid program to cover check-ups and other so-called “post-partum” care for up to a year after a woman has given birth.