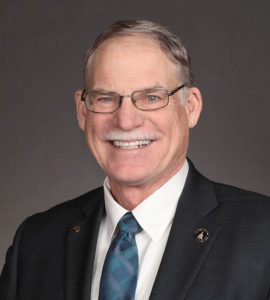 A key Senator says the Iowa House has approved a meaningless plan that would prevent carbon pipeline developers from applying for government condemnation of land along pipeline routes before February 1 of next year.

Senator Dennis Guth, a Republican from Klemme, says the Iowa Utilities Board chair told him there’s “absolutely no way” the eminent domain process would be even close to being completed by February 1.

“The bill really does absolutely nothing and it doesn’t belong on a budget bill anyhow,” Guth says, “so it’s not going to stay on my budget bill.”

Guth is chairman of the Senate subcommittee that oversees the Iowa Utilities Board budget. Guth says he’s working with Senate leaders and the Utilities Board on a bill that would restrict what eminent domain may be used for.

“Trying to make sure that we keep eminent domain for the sorts of things that we think it should be used for,” Guth says, “rather than using it with a broad brush all the time.”

But Guth says his bill is still in development and won’t be ready until 2023. This debate over construction of carbon pipelines cuts close to home for Guth. “The pipeline would go one mile from my house, through a farm that I rent,” Guth says.

Guth says there are “a whole lot of things not to like” about the prospect of having developers seek eminent domain authority from the Iowa Utility Board, to acquire land from property owners who don’t want the pipelines on their ground.

“We don’t believe that we should use eminent domain for a project that’s going to take a private landowner’s property and use it for a purpose that we don’t even agree with necessarily,” Guth says.

Ethanol producers and some corn growers say the pipelines would reduce the carbon load from ethanol plants and, ultimately, benefit farmers by extending the life of the ethanol industry. Guth suggests the primary beneficiaries of carbon pipelines would be the private developers.

“Eminent domain is something we can use when you want to build a road or when you want to put in a natural gas pipeline where you are going to have all kinds of homes hooked up to that and you’re going to be doing a benefit to the people,” Guth says. “This carbon pipeline is just going to go straight out of Iowa, into another state, and isn’t going to benefit the people of Iowa at all.”