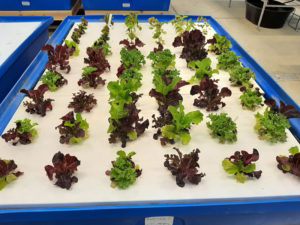 The Morningside greehouse grows greens for use on campus. (KSCJ photo)

Morningside University’s agricultural program continues to grow, with a new greenhouse on the Sioux City campus to give students some hands-on growing experience.

Department head Tom Paulsen says the greenhouse has space for many different projects and modern technology to water the plants.

“The flood benches — we’re hooked into a system where we can set how ofter they are watered based on the transpiration of the plant — it’s called vapor pressure deficit. All of our benches now are automatically watered. And they are watered from the bottom up,” he says.

Senior Gage Dewsbury says another project involves using fish to help grow a crop. He says they use the fish waste to get nitrates to fertilize the plants and then the water is recycled back to the beginning. Dewsbury says that system is used to grow lettuce and other leafy greens that are used on campus

“We will send a lot of the lettuce and stuff to the school cafeteria. And then the amaranth and the other stuff actually goes to an ethnic food market in town,” Dewsbury says.

The Rosen Ag Center and Lags Greenhouse are located on the former site of the old Longfellow elementary school building: