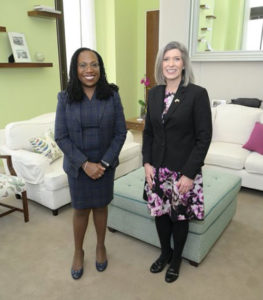 “Perhaps my greatest issue with Judge Jackson is her lack of adherence to a judicial philosophy,” Ernst said during remarks on the Senate floor.

Ernst said as a member of the Senate, she will only vote for justices who pledge to be an “originalist” and interpret words in the Constitution based on their meaning at the time the document was adopted in 1788.

“If a justice’s legal interpretation has no philosophical grounding, that provides flexibility for a justice to bend their thinking to achieve a desired outcome,” Ernst said. “…We have enough politicians in the legislative branch. We don’t need any in the courts, especially the Supreme Court.”

Ernst, who met with Jackson on March 30, says the judge showed “grace under pressure” during last week’s Senate Judiciary Committee hearing, but Ernst said Jackson’s answer when asked to define a woman was troubling.

“The judge responded that she’s not a biologist,” Ernst said. “…”While I’m grateful Judge Jackson believes science is the basis for determining a woman, I’m deeply concerned that a fellow woman, who is set to define the contours of laws that are specific to women, has to even think about an answer to that question.”

Iowa’s other U.S. Senator, Chuck Grassley, also plans to vote against Jackson’s nomination. Jackson is on a clear path to joining the nation’s highest court, as three other Republicans in the Senate have announced they’ll join with Democrats to confirm Jackson.