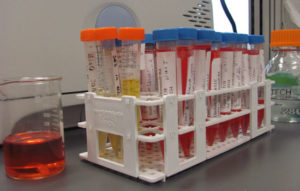 Iowa Central Community College in Fort Dodge is going to use a donate vacant store from Casey’s for the future home of its Biofuel Testing lab.

Iowa Central president, Jesse Ulrich, says the new building allows them to expand operations. He says they started the biofuel lab ten years ago and it was one of the first back then and now they are looking to expand it to better serve Iowa and the rest of the country as well.

Ulrich says they are in the planning stages after Casey’s agreed to give them the building. He says they hope to get bids this summer and it will take one year to 18 months to build it. Ulrich says it will allow them to get students more involved in the biofuels testing lab.

“What we’re really looking at is being able to expand that into having more and more students take part through apprenticeships and learning from that lab,” according to Ulrich. “And by vacating
chemistry labs or some type of classroom space for the general academic side as well.”

The new center will be located on the west side of Fort Dodge near the Iowa Central campus and not far from a Bio Ag center where Cargill, Valero Energy, and CJ BIO have production and processing facilities.