You are here: Home / News / Three people charged in connection with theft of Iowa church bell 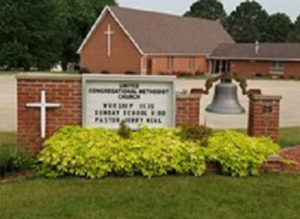 The missing bell shown in this photo from United Congregational Methodist Church in Lewis.

A church bell stolen last month from the property of a church in southwest Iowa is believed to have been destroyed. Three suspects in the case have been arrested.

A 400-pound bell that’s been in existence since the late 1880’s was torn from bolts mounting it to two brick pillars near the entrance to United Congregational Methodist Church, in Lewis. On Tuesday, the Cass County Sheriff’s Department announced three people were arrested for allegedly stealing the historic piece.

Authorities say 31-year-old Trenton Baier from Lewis and 30-year-old Shialea Cozad and 62-year-old Phillip Duncan, both of whom are from Omaha, were taken into custody for theft in the 2nd Degree. Cozad and Duncan were additionally charged with controlled substance violations.

A $5,000 reward was being offered for information leading to the arrest of the person or persons involved in the theft, but the sheriff’s office says those eligible for the funds declined the offer.