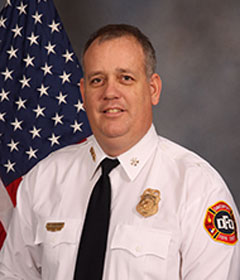 The Davenport Fire Department is celebrating its 140 year anniversary with a series of open houses.

Chief Mike Carlsten says the department started small and has grown to meet the needs of the community. “From the research we’ve gathered, they started out with one fire chief and 12 men back in 1882. As of today, we have 135 sworn firefighters with two civilians, eight engine companies, and three truck companies,” he says.

Carlsten says the equipment has changed a lot since then along with the fires they face. “Back then you’d have a lot of cooking fires. Building construction was a lot different, the house was a lot smaller and together. Electricity is prevalent today, I don’t know how prevalent it was years ago,” Carlsten says.

He says the philosophy has also developed beyond just reacting when a fire happens. “Throughout the years the fire service has focused a lot on public education,” according to Carlsten. “We realize the value of prevention and the education — that if we can prevent fires from ever happening — it is easier on the community and our men and women don’t have to respond to those types of emergencies.”

Carlsten says they felt having open houses at the various stations would be a good way to show the community the resource they now have. And he says many people don’t have interaction with the department unless there is a fire — and this gives them a chance to answer questions.

“Questions like ‘why for a 911 call do we send a fire truck and an ambulance?’ even though they are from two different agencies. Things simple as, ‘why do you paint the color of your hose yellow at this station and red at this station/’ and how it is marked,” Carlsten says. “You know just share a little bit of that institutional knowledge with members of the community and answer the questions.”

They will have open houses at each of the stations for an hour-and-a-half on the second Saturday of the month. The first open house is this weekend. See the complete schedule at www.davenportiowa.com.