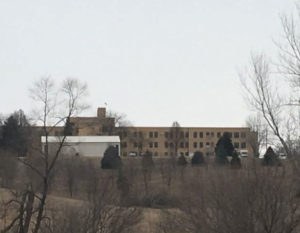 The chairman of the Mills County Board of Supervisors says the decision to close the state-run facility in Glenwood that provides residential care for Iowans with intellectual and developmental disabilities “is devastating.”

Mills County Supervisor Richard Crouch is also president of the Glenwood Resource Center’s parental and family support group. His son was a resident at Glenwood until his death in January.

“I’ve had some parents calling me asking what’s going to take place, where’s my child going and so on,” Crouch said.

The governor announced late yesterday that the Glenwood Resource Center will close by 2024. Some residents will be transferred to a similar state facility in Woodward, but most will be placed in privately-run facilities, with the state covering the cost of care. Staff at the Glenwood Resource Center will be offered retention bonuses to keep working during the transition. Crouch says he’s concerned about job prospects for those workers and the impact the closure will have on the local economy.

“There’s quite a few workers up there yet and, yes, I know it’s going to take two years, they say, for it to close, but it’s still going to have an effect on the whole of southwest Iowa,” Crouch said.

It will be tough for the community to absorb the loss of a major employer, according to Crouch, who suspects many employees will move.

“There are 300-400 people that work there,” Crouch said. “…You know, there’s not many facilities like this or paying jobs like this in southwest Iowa.”

Glenwood is in the state senate district of Mark Costello, a Republican from Imogen. Costello is also the chairman of the senate panel that drafts the budget for the Iowa Department of Human Services, the state agency that oversees the Glenwood Resource Center.

“It’s really something I could see coming for a while, but it’s still — when I heard the news that we had made that final decision — it’s really discouraging, you know, because we tried so hard to find a way to keep it going,” Costello said, “and we really couldn’t see a way forward.”

Costello expects moving will be difficult for some residents.

“Transition is never easy, even when it’s good,” Costello said. “And it’s a little bit harder, even, for intellectually disabled people than for the average person.”

The U.S. Justice Department has been investigating operations at the Glenwood Resource Center over allegations that residents were not being provided adequate care. Federal officials say the state will be able to spend less — and provide better care — if residents are moved out of Glenwood’s institutional setting and into community-based care.