You are here: Home / News / U-I student to host ‘Conversation Hour’ about her home country of Ukraine 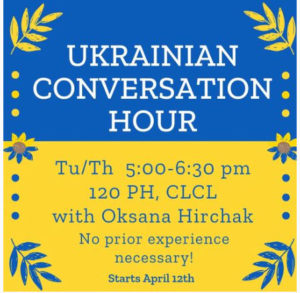 A University of Iowa student from western Ukraine has been watching the war from afar and decided she wanted to do something in Iowa City to answer questions about her home country and explain its history.

Oksana says the university’s language center staff offered immediate support when she approached them with her idea for a “Ukrainian Conversation Hour” on campus.

“I thought it would be nice to have, like, especially right now when people hear a lot about Ukraine — and maybe there will be students who would be interested in the Ukrainian language and core culture,” she says, “and I want them to have where to come and who to talk who could help them.”

Hirchak, who is a psychology student at the University of Iowa, says she’s ready for any questions students may have for her.

“It’s just like Ukraine is far — it’s like really really far…and they might not know a lot about this country,” she says, “so I want to make it closer to them.”

She’ll host her first “Ukrainian Conversation Hour” next Tuesday night on the University of Iowa campus.