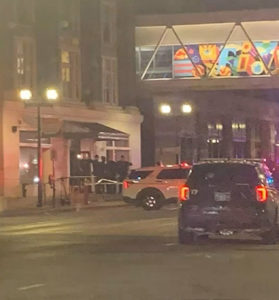 Outside the nightclub where the shooting took place. (KCRG TV photo)

Two people were killed and 10 others injured in a shooting early Sunday morning in a Cedar Rapids nightclub and Cedar Rapids Police Chief Wayne Jerman says investigators believe the two men who fired at least a dozen shots likely escaped with the fleeing crowd.

There were up to 150 people inside the Taboo Nightclub at the time of the shooting.

“We need information,” Jerman said during a Sunday afternoon news conference broadcast by KCRG TV. “…If anybody was there, if anybody was told that a friend was there and a friend witnessed (the shooting) — please, come forward and give us that information. Your identification is going to be protected. You may remain anonymous.”

Jerman indicated investigators believe one of the victims who was killed was being targeted. Cedar Rapids Mayor Tiffany O’Donnell, who also spoke at the news conference, expressed sympathy to the victims and their families.

“Shock, anger, grief, disappointment — just a few of the emotions we all feel…This is not who we are. This is not Cedar Rapids,” O’Donnell said.

The mayor urged Cedar Rapids residents to do their part of quell violence. “Will you be the tap on the shoulder when you see someone going down a dangerous path?” O’Donnell asked. “Will you have the courage to report illegal activity when you see if happening, before it turns into something tragic? Will you be the voice of reason when tempers flare?”

The city’s police chief said officers were outside the nightclub, responding to another incident as people started running outside and people inside were calling 911.

“We believe there is not an elevated level of public safety risk,” Jerman said. “The incident was contained to the nightclub and has not expanded into the greater community.”

Investigators have not determined a motive for the shooting, which happened just before 1:30 a.m. Sunday. “This is another mindless and senseless gun-related incident involving a reckless disregard for human life,” Jerman said.