You are here: Home / News / Judge rules Finkenauer did not qualify for Primary ballot 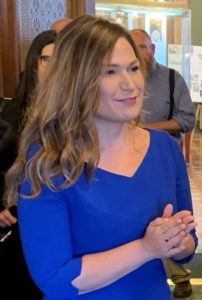 A judge has ruled Democratic U.S. Senator candidate Abby Finkenauer’s name cannot appear on the June Primary ballot, a decision likely to be appealed to the Iowa Supreme Court.

Finkenauer is a former Iowa congresswoman and one of three Democrats competing for a chance to face Republican Senator Chuck Grassley in the General Election. Two Republicans challenged Finkenauer’s nominating petitions for the Democratic Primary, arguing three nominating signatures were invalid, because one had the wrong date, one had no date at all and one had a zip code listed on the signature line.

The district court judge issued his ruling late Sunday night, saying those signatures were invalid. That changes the narrow tally of signatures Finkenauer’s campaign collected. Candidates for the U.S. Senate are required to gather at least 100 signatures in at least 19 different counties. Without the three signatures, Finkenauer does not have enough signatures in two counties and falls short of the requirement.

The ruling overturns a decision by the State Objections Panel, which said it was clear the people who signed Finkenauer’s petitions had signed on a particular date since people who signed before and after had listed the proper date. The judge ruled Iowa law is clear that the date must be listed on the signature line.

Finkenauer released a written statement, saying the “midnight ruling is an outrageous and partisan gift to Washington Republicans” who she says “orchestrated” the lawsuit. Finnkenauer indicated her campaign is exploring all its options, but stopped short of announcing an appeal to the Iowa Supreme Court.

(This story was updated at 10:00 am with additional information.)