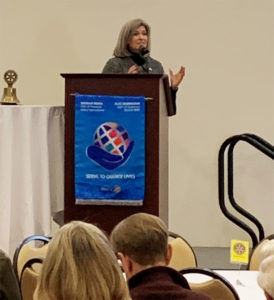 “Those that have laying flocks and those that are also poultry producers have really upped their game since 2015 when HPAI first came through Iowa…making sure they have all the biosecurity measures in place,” Ernst says.

In the massive bird flu outbreak in 2015, the virus spread among commercial operations. Officials from the USDA and the Iowa Department of Agriculture say it appears this year’s outbreak is being spread by wild birds that come into contact with backyard flocks and commercial poultry operations. Ernst says when a sick flock is detected, there’s a quick and coordinated response from federal, state and local officials.

“I feel better about it this time around,” Ernst says, “so we’ll just plan and pray for the best.”

Ernst met with poultry producers in Clarion earlier today. Scientists believe this current strain of bird flu is similar to the virus that has been periodically circulating in Europe and Asia.

“It’s just like with COVID, it’s just something that will be around and that’s why the biosecurity is so important,” Ernst says. “After we learned that lesson in 2015, a lot of measures have been taken since then.”

The outbreak of avian influenza among wild birds in America is far more extensive than it was seven years ago. The virus has been confirmed in 40 wild bird species in 30 states.