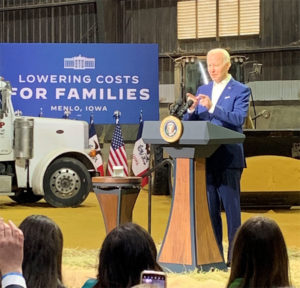 President Biden has taken a temporary step to ensure E15 can be sold year-round.

“The Environmental Protection Agency is planning to issue an emergency waiver to allow E15 gasoline that uses more ethanol from homegrown crops to be sold across the United States this summer, in order to increase the fuel supply,” Biden said this afternoon in an ethanol plant in Menlo, Iowa, drawing cheers from a crowd of invited guests.

The White House had announced the decision hours earlier, described as part of the Biden Administration’s agenda to build energy independence in the long term and make fuel more affordable in the short term.

“Your family budget and your ability to fill up your tank — none of it should hinge on whether a dictator declares war and commits genocide a half a world away.”

Emily Skor, executive director of Growth Energy — a trade association for ethanol producers, said the president has made a commitment to find a permanent fix.

“We’re talking, actively working with the administration on things the EPA could do. There’s also an opportunity for a congressional fix,” Skor said. “The good news is we’ve got 12 months to figure it out and drivers will be covered this summer at a time when theyre’ still experiencing pain at the pump.”

In 2019, the Trump Administration moved to allow nationwide E-15 sales from June to mid-September. A federal judge ruled in favor of the oil industry’s challenge of that move and the U.S. Supreme Court declined to hear the case. That means the litigation path for addressing this issue is closed and Skor said the industry is pursuing two options: EPA action or passage of a bill in congress.

“We’ve got bipartisan legislation introduced, active conversation with our congressional champions and we’re also in active conversations with EPA,” Skor said. “One of those two avenues needs to come through for us because this is a fuel of the future. It’s lower cost. It’s lower carbon and it can be used on current cars on the road today.”

“E15 — it’s an excellent solution to some of the energy conversations that are being had right now in the entire world situation,” Johnson said. “It’s good for Iowa, it’s good for Iowa producers and we’re excited that the president came here to make this announcement.”

Biden made the announcement in a storage barn for dried distillers grain, a by-product of ethanol production and hosts left a 300 ton pile of it inside for the event.. Michael Walz is a V-P for POET, the company that owns the facility Biden visited.

The Iowa GOP purchased billboards on Biden’s route out of and back to the Des Moines Airport with messages about inflation and high gas prices. Republican office-holders issued written statements generally praising Biden’s move to promote E15, but they raised other issues. Congresswoman Ashley Hinson called for more security at the southern border and Senator Chuck Grassley called it a crisis situation. Governor Reynolds issued a “thank you” to the president for what she described as “welcome news” on ethanol, but Reynolds said the Biden Administration has more to do to address high energy costs.