You are here: Home / News / Biden expected to make ethanol announcement in Iowa 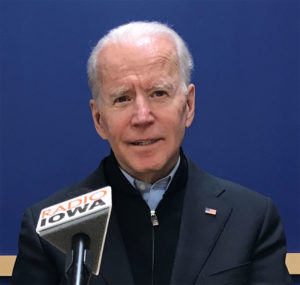 President Biden will visit an Iowa ethanol plant today to highlight steps to expand the use of “homegrown” biofuels.

Biden is expected to announce that the Environmental Protection Agency will issue a waiver so E15 — gasoline with a 15% ethanol blend — can be sold nationwide all year long. Under current regulations, E15 cannot be sold in most of the country between June 1 and September 15.

The leader of Growth Energy, a trade association for the ethanol industry, says this is “welcome news for all American drivers seeking lower cost options at the pump.” The USDA is providing $100 million in grants for installing or upgrading gas station equipment that can dispense gasoline with higher blends of ethanol and diesel with a higher concentration of a soybean-based additive.

On Monday afternoon during an interview in Ames, Republican Senator Joni Ernst said expanding the biofuels industry is a national security issue. “It’s not only important for the United States — clean energy! — but it sure is a great way to push back against Vladimir Putin,” Ernst said. 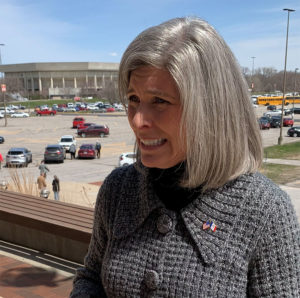 Ernst was first elected to the U.S. Senate in 2014 and has lobbied the Obama, Trump and Biden Administrations on policies to expand ethanol production. That includes refusing to issue waivers so oil refineries don’t have to blend ethanol into gasoline and E15 to be sold year-round all around the country. Anti-smog rules have prevented E15’s sale in most areas during the summer months.

Ernst said Biden’s trip to Menlo was a surprise.

“With everything that is going on, I just did not anticipate that he would be traveling right now. His approval levels are very low, but at the same time, you know, he needs to be out engaging with the public. We’ve got high inflation. We’ve got high gas costs…He needs to get out and he needs to explain his position,” Ernst said. “He needs to engage with constituents — and maybe that would help.”

The chairman of the Iowa Democratic Party has said he’s thrilled Iowans can hear directly from Biden about the agenda Democrats are pursuing “to lower costs for working families.”

This is Biden’s first trip to Iowa as president. Biden was last here four days before the 2020 General Election, for a drive-in rally on the Iowa State Fairgrounds.