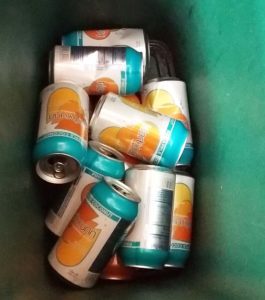 Some cans and bottles require a deposit under Iowa law.

By an overwhelming margin of 73-to-17, the Iowa House has voted to make changes in Iowa’s popular Bottle Bill. The Senate passed similar, but not identical legislation last month.

Representative Brian Lohse of Bondurant suggested it’s a watershed moment for the law that assesses a nickel deposit on containers of beer and pop, to encourage customers to recycle the empties and get their nickels back.

“For many years now we have discussed and negotiated adnauseum how to modify and update this law so that we can correct the problems that have developed,” Lohse said. “…The rate at which Iowans have redeemed cans and bottles appears to be shockingly low…The number of places or lack thereof for consumers to redeem them have consistently dwindled over the years.”

The House and Senate now have both voted to let grocery stores quit accepting empty beer and pop containers and repaying deposits, but the House has added a new twist. Any grocery store that continues to serve as a redemption site would be paid a handling fee of three cents per container. That’s the new rate redemption centers in the business of just handling empty containers would get, too.

“If (grocery stores) are going to do what redemption centers do, then they should also not feel the pain of one cent,” Lohse said, “which is part of the problem that we have currently.”

The House-passed plan has a reporting mechanism to try to figure out the amount of unpaid deposits wholesale distributors of beer are keeping, but that’s not included in the bill the Senate passed in late March. Any changes in Iowa’s bottle and can deposit law would have to pass the House and Senate in identical form before a bill would be sent to the governor.