You are here: Home / Sports / Iowa to play in Emerald Coast Classic 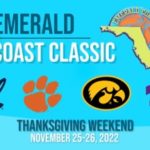 The tournament will be played Thanksgiving weekend Nov. 25-26 at Raider Arena on the campus of Northwest Florida State College.

Both Iowa and TCU played in the 2022 NCAA Tournament with the Horned Frogs beating Seton Hall, 69-42, in the first round. TCU fell to top-seeded Arizona, 85-80, in overtime in the second round.

Iowa captured the 2022 Big Ten Conference Tournament championship, tied for fourth in the conference standings and won 26 overall games, the second most win total in a season in program history.

Fran McCaffery has coached Iowa to 20-plus wins eight of the last 10 seasons, including four straight years. The Hawkeyes have competed in the last three NCAA Tournaments and have been ranked in the final Associated Press Poll each of the last three years: No. 16 in 2020, No. 8 in 2021 and No. 25 in 2022.

The Horned Frogs’ second NCAA Tournament bid under coach Jamie Dixon was their fourth postseason appearance in the five seasons that postseason was held, the best in program history.

TCU will have all five returning starters back from its 2021-22 team which finished 21-13, its fourth 20-win season in six years under Dixon with a program-record five wins over AP Top 25 teams. TCU surged late with consecutive victories over top-10 opponents in Texas Tech and Kansas to secure a NCAA Tournament berth.