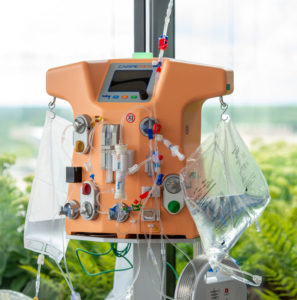 The University of Iowa Stead Family Children’s Hospital now has new technology to provide dialysis to its smallest patients.

Doctor Jennifer Jetton says the machine can provide dialysis for infants weighing between five and 20 pounds. “For those babies, we have not had machines, dialysis machines that have been designed specifically for that size. And we’ve had to make do with equipment that is designed and FDA approved for adults,” Jetton says.

The Cardio-Renal Pediatric Dialysis Emergency Machine (CARPEDIEM) was developed and has been in use in Europe since around 2013, and she says they’ve been just really anxiously waiting to have access to it in the United States.

“Just because it is so much smaller. And it is designed specifically for babies in mind. So  the amount of blood that’s out of the body at any one time is much, much smaller than the scales and the accuracy is very precise down to one gram,” she says.

Doctor Jetton is a pediatric nephrologist, and says they have been training and establishing protocols for the machine. She says it is not something they will use a lot right away.
“But I think a few times a year is what we are kind of anticipating maybe more than that. I think in the center that first started using it, it started in Cincinnati, children’s they had like one patient, and then all of a sudden they had two and then they had three kids,” she explains. “So again, once you have it, and it’s out there, then the options, you know, cases where it can be beneficial become more, more clear.”

Doctor Jetton says the machine helps the babies get through kidney problems. “They’ve developed something called acute kidney injury, where their kidneys are temporarily not working very well. And they need help with getting rid of all the fluids that they need, as part of like their nutrition or medications, and then help with balancing all their body salts like their sodium and potassium,” Jetton says.  She says those are the two main things that the kidneys do normally.

Jetton says any new therapy requires lots of preparation before it is put into use. “Anytime you’re talking about a baby within the intensive care unit who’s sick enough to need dialysis, it’s risky. And so there’s a lot of work that goes into training the team and making sure that we’ve thought about safety in every possible way for these kids,” she says.

Jetton says it has been an entire team effort to get the machine and work out all the training and protocols so they can put it into use.