You are here: Home / News / Governor says state had no choice but to close Glenwood Resource Center 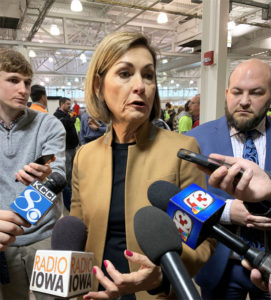 Governor Kim Reynolds says based on the federal investigation of problems at the state-run facility in Glenwood that provides residential care for Iowans with intellectual and developmental disabilities — closure was really the only choice left to state officials.

“This was a really, really tough decision, but after two years of COVID and after the DOJ’s findings and what their recommendations are, after continually trying to look for ways to make that work, we can’t,” Reynolds said late this morning.

The Department of Justice released a report in December that concludes the majority of residents at the Glenwood Resource Center could be cared for in private, community-based facilities instead and the state would spend less money on that care compared to the institutional setting at Glenwood.

“Honestly, their objective is to go to community based living,” Reynolds said. “That’s where they believe the residents should be and so when you take all of that into account, we didn’t have a choice,”

Last Thursday, Reynolds announced in a written statement that the Glenwood Resource Center would close in two years after some residents are transferred to a similar state facility in Woodward, but the majority go into private care settings. Staff who stay during the transition will be paid retention bonuses and other employees are being offered job search assistance.

“That really gives the respect and dignity to the residents and to the people that work there and have served these residents for years,” Reynolds said.

The governor told reporters it was growing more difficult to find staff, plus she says there had been legitimate questions raised in 2019 about the care and safety of residents — leaving closure as the final option.

“We have to move forward and so I appreciate all of the efforts that’s been put into doing that in a respectful manner because I’m telling you no one wants to make that decision and it’s hard,” Reynolds said. “Really hard.”

Reynolds made her comments to reporters after attending an event on the Iowa State Fairgrounds.

Iowa Department of Human Services director Kelly Garcia met with the family members and guardians of Glenwood residents this weekend and other state officials have been in Glenwood to talk about what’s next.