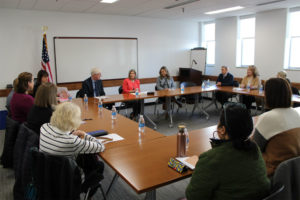 Senator Ernst during the discussion. (photo from Ernst’s office.)

Iowans who are advocates for victims of sexual assault say they’re pleased the re-authorized Violence Against Women Act includes money for prevention efforts as well as services for victims. Iowa

“We have actually increased the authorization that will be going to these specific programs that address prevention,” Ernst said.

“It’s important for survivors, but it’s also important that we stop it before it’s happening,” she said. “That middle school age is a primary target for sexual assaults happening.”

Mira Yusef is executive director of Monsoon, an organization with offices in Des Moines and Iowa City that works to end human trafficking and violence against Asians and Pacific Islanders.

“Prevention is so crucial,” she said. “Man and boys who mostly are the perpetrators, the harm-doers of sexual violence…How do we prevent that?…How can we then extend that to the elementary school age, to the middle school, to have the discussion about healthy relationships?”

Kellie Markey, the founder of Dorothy’s House — a residential home for victims of human trafficking, said pornography is distorting what young people, in particular, view as a healthy behavior.

Markey was among more than a dozen people Senator Ernst invited to a roundtable discussion of the Violence Against Women Act. A month ago, President Biden approved a bipartisan plan to reauthorize the law for five more years.