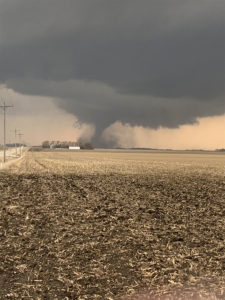 The weather service rated two of those tornadoes as EF-2s on the scale which classifies zero as the weakest and five as the strongest. Those were east of Bradgate and the other ran from Palmer to Gilmore City. There was an EF-1 southwest of Rutland, and one in Mason City.

There was an EF-0 in Kanawha. Mitchell and Howard County saw three tornadoes — with two rated EF-1s and the other an EF-0.

Many buildings, houses, and trees were damaged — but there were no deaths or injuries reported following Tuesday’s outbreak.