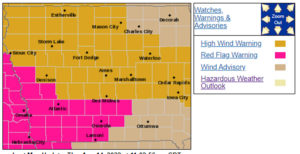 The National Weather Service has issued a red-flag warning for the western half of the state today.

“We have some extreme fire conditions that are expected this afternoon and evening, mainly over western and to kind of like southwest, or west-central Iowa,” meteorologist Kristy Carter says. She says the moisture in the air and the wind are causing the concern.

“We’re looking at relative humidity that will be dropping below 25% — which with winds that’ll be gusting to 55 miles an hour over will create some extreme fire behavior if a fire would start,” Carter says. She says the fire would rapidly spread under those conditions.

“Usually, you need really dry conditions for fire, if it would start to be able to spread quickly and with a little bit higher relative humidity in the northern and eastern parts of the state, that’s why we don’t have the Red Flag Warning extending quite, I guess, as far north and east,” she says. “But there is a wind advisory, in effect that actually has just been upgraded to high wind warning for most of northern Iowa.”

Carter says we are going to have to deal with the winds all day and into this evening. “Anyone that’s driving, especially on north-south highways can expect some really strong crosswind, lightweight, outdoor objects, trash cans, that kind of thing are definitely going to be blown around today. So you want to secure those outdoor objects and definitely try not to burn today if at all possible,” she says.

Carter also says we are going to stay cooler, with highs in the 40s and 50s rolling through the weekend