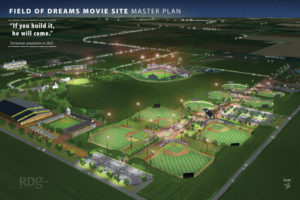 (graphic provided by Go the Distance.)

The chief operating officer of the group which now owns the Field of Dreams movie site says the plans they have announced for development there will not take away from the past and future memories.

The Thursday announcement of an $80 million investment by “Go the Distance Baseball” has generated a lot of comments. COO Dan Evans says they plan to build nine new ballfields, dormitories for teams, a hotel, and other phased-in improvements.

“The Field of Dreams is a great place. And people have had some grand plans through the years and for whatever reason, it just didn’t come to fruition,” he says. “We wanted to make sure we were in a place where we could make an announcement knowing that this was going to move not only to the finish line but in a situation where it would be I think the greatest baseball softball destination in North America.”

He says they waited to make the announcement until they had all the design, engineering studies, renditions with the architects, and the financing questions answered. “We wanted to make sure the property looks and acts the same. So whoever wants to come to see the Field of Dreams movie site is not going to see a movie site that is compromised,” he says.

The site came back into the national spotlight after Major League baseball held a game at a field built near the site. Evans says the landscape allows them to build there without impacting the image that fans already know.

“If you’re on the Field of Dreams movie site if you had been in the Major League stadium this year for the game, or in August, upcoming, you would not be able to see the build,” according to Evans. “And that was absolutely an urgent thing for us. We didn’t want to do anything that altered the pristine image of the Field of Dreams. And we believe we’ve accomplished that.”

Evans says they want to eventually have the field become the home of high school state championship games. “We would love to be the site of the finals for both the baseball and the softball, high school tournaments here in Iowa. We want to be Iowa’s epicenter of baseball and softball,” he says.

Evans says that fits in with what they want to accomplish. “You know, we’re pushing our cards, our chips into the middle of the table, simply because we think what is there, is there a better venue than ours will be in the future. We’d love to share our facility with the youth of Iowa. And we can’t think of a better venue than that one,” Evans says.

He says all the fields will be surrounded by corn to bring the feeling of the original field to them.
“We want to make baseball and softball a vehicle for kids to improve their character, learn agriculture experience, rural Iowa, but also perhaps see the game as a way to progress through a university education,” he says. “And then what we have is we have a better society, we have better kids that are able to contribute more.”

He says nine baseball-softball fields to the north end of the property will be ready for play in the summer of 2023.