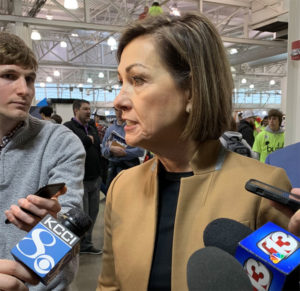 The director of the Iowa Department of Human Services says state officials have visited with some Afghan families directly to confirm they are getting essential services like housing and food assistance.

Kelly Garcia’s statement comes after a Des Moines Register investigation found some families living in extended-stay hotels in central Iowa were running out of food and could not contact their caseworkers.

Garcia said her department is working directly with resettlement agencies. “We, I think, have broken open all of the challenges that they’re experiencing,” Garcia said during an interview with Iowa Public Radio, “and have…reestablished that connection of a direct line to us, so that we can problem solve for them.”

After an appearance on the state fairgrounds on Wednesday, Governor Kim Reynolds told reporters resettlement agencies, not the state, are directly responsible. “If they don’t share any information with us, we don’t know,” Reynolds said, “so that’s why my team proactively met with all the refugee resettlement agencies prior to one, very few, coming into the state so that we could say: ‘You have the information. You make the decisions, but we want to help.'”

Part of that help, the governor said, has come as state officials redirected emergency rent assistance from the 2020 pandemic relief package. “We actually called the federal government and got the O.K. from them. There’s only one other state that has done that,” Reynolds told reporters. “It’s working in Cedar Rapids. It’s working in Le Mars. We’ve had great outcomes with them working with the state.”

About 900 Afghan refugees have been resettled in Iowa so far.