You are here: Home / News / Honor flights to resume in May 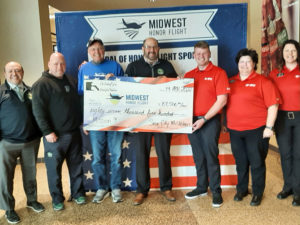 Honor flights for local military veterans to fly to Washington, D.C. to visit the memorials honoring their service and sacrifice will begin again next month after being paused during the pandemic.

All expenses are paid for those veterans through donations, and the Sioux City Musketeers hockey team presented a check to sponsor the next 84 World War Two, Korean and Vietnam veterans making the flight to the nation’s capital.

Travis morgan along with team owner Lloyd Ney presented a check for $85,700 to honor flight representatives in Sioux City. “We were able to raise almost 90,000 dollars in jersey sales during last year and this year to sponsor one of the greatest causes you could possibly ask for,” he says.

Vietnam veteran, Richard Storm of Sioux City who flew on the last honor flight back in October. He served in vietnam for a year starting in March of 1970. “When we got off the plane until we got on the bus, the entire concourse was lined with volunteers, welcoming us back, cheering and sorry, I get a little teared up here, I told my children and my grandchildren this is the welcome back we never got,” Storm says.

Storm says after coming home from his Vietnam service he was looked at differently than he is today, so he did not talk about his service for years. “For years and years, I mean, I never said anything about my service and never told my children about it. I never showed them pictures, didn’t join veterans groups until maybe, probably about 15 years ago, just never was involved,” Storm says. ” And I would say in the last 10 years, you know, it’s been an honor to be a Vietnam veteran. We’re a brotherhood, and we’ll be all I think for the rest of our lives.”

This will be the 9th midwest honor flight and it will leave on May 14th.