You are here: Home / News / On legislature’s 99th day, no final decisions yet on state spending plans 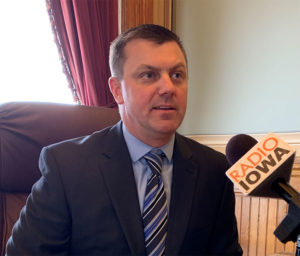 This is the 15th week of the 2022 Iowa legislative session, but there’s no agreement yet among majority Republicans on the bills outlining the state budget for the fiscal year that starts in 74 days.

Republicans in the House have sent the Senate all the bills outlining their budget plans. Jack Whitver of Ankeny, the Republican leader in the Senate, hasn’t brought any of them up for a vote.

“We’re just not interested in going up another $70 million in the budget,” Whitver says.

Whitver says Republicans in the Senate have developed their own budget plans for state operations that use the governor’s spending target of $8.27 billion as a guide.

During House debate over the past few weeks, minority Democrats have been arguing that with a billion dollar budget surplus, more money should be spent to address specific problems, like prison staffing and water quality.

“As Democrats, we recognize problems and we want to fix them and we don’t just gloss over the fact that we live in this tale of two states,” Representative Brian Meyer, a Democrat from Des Moines, said. “We don’t have a lack of money. We have a failure to appropriate.”

Two of Republican Governor Kim Reynolds’ top policy proposals are stalled alongside budget negotiations. Republicans in the Senate have passed the governor’s plan to provide parents state money to cover private and parochial school expenses, while Republicans in the House have yet to bring it up for a vote.

Republicans in the House and the Senate have passed the governor’s proposal to reduce the maximum amount of unemployment benefits from 26 to 16 weeks, but her recommendation that there be a one-week waiting period before benefits are paid was only included in the Senate’s bill.