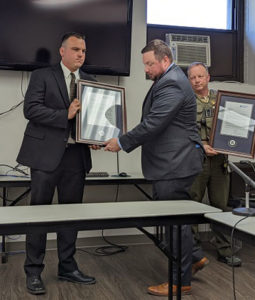 An Agent with the Department of Homeland Security Intelligence and Analysis Division, in Des Moines, was on hand for the presentation of awards to Trooper Tyler Shiels and Sheriff Darby McLaren. The Agent, who only identified himself as “Jim,” said the way the incident was handled was exemplary.

It all began with a traffic stop on Interstate 80 in Cass County. “The traffic stop. And then the coordination that has kind of come out of it has been held up as an example across the country. It was just recently brought up last week at the National Fusion Center and conference, again of just how the system is supposed to work. And so again, thank you, gentlemen,” he says. 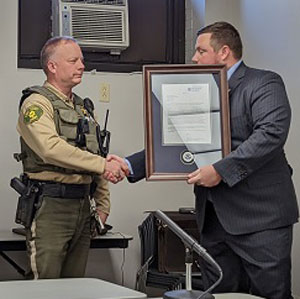 Trooper Shiels initiated a routine traffic stop on a vehicle being driven aggressively by 25-year-old 25-year-old Kuachua Xion, from California, on December 21st, 2021. The Agent says Shiels’ intuition and quick thinking, prevented an attack on the government by the man.

” He was on his way to the White House there was you know the GPS that was kind of heading that direction, along with all the various items that were found inside of the vehicle the AR15, the ammunition, the money for what appeared to be post-event burial if needed,” he says.

Sheriff McLaren credited Shiels’ training with being able to see the driver’s answers weren’t making sense and was able to communicate with him to draw out more information. “He was able to ask a limited number of questions and be able to detect that there was more going on and why he was going from California to Washington, D.C. in a couple of short questions and answers he was able to identify a problem,” McLaren says.

Shiels says the things he had learned came together to save the day. “Just based on my training experience, I knew that there was it was not a routine type of traffic stop I just I believe that there was some type of criminal activity taking place. And I was fortunate for my training and experience to be able to hopefully prevent what could have been a very bad day,” Sheils says.

According to the criminal complaint Xiong initially said he was recently fired and was traveling to D.C. to “photograph the White House. ” He then allegedly began talking about the political situation in the nation’s capital, dismissing right-wing conspiracy theories, how he was on his way to Washington, D.C., to allegedly “do whatever it takes” to kill government leaders on his hit list.