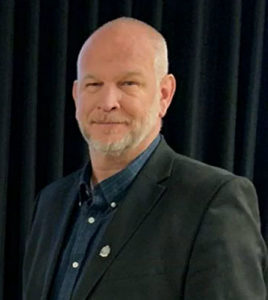 Dalsing died on Friday after a sudden illness at the age of 55. He served the Dubuque Police Department for more than three decades and had been retired for just seven months. Jensen had worked with Dalsing for 28 years and he told KCRG TV Dalsing still helped him after he was appointed his successor in March.

““I had my resource, I could still call him, text him and say, ‘Hey what is up with this’, or ‘What do you think about that?’ Now I don’t have that.” Jensen says. Jensen says, now that Dalsing has died, he feels a new sense of responsibility being his successor. “And so there’s this responsibility now — things that he started — it seems like there’s more urgency to it,” he says.

He points to two major projects that Dalsing started that he wants to make sure keep moving forward. First, he emphasized how Dalsing focused heavily on officer wellness, both physically and mentally. He also mentioned the former chief made community engagement a priority, encouraging officers to become a part of the community more than just patrolling.

“If you ran into Mark at the store with your kids, he would ignore you and go to your kids and start playing with your kids. And that’s the way he was,” Jensen says. Jensen said, right now, making sure their officers are healthy is the number one priority. He explained the Wellness Committee, an initiative Dalsing started, and peer support groups have been at the police department nonstop assisting staff.