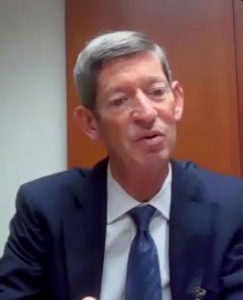 MercyOne CEO Bob Brits says National Catholic Health Systems came together in Iowa in 1998 to pull together their ministries to improve access and availability of health care services in Sioux City, Dubuque Mason City, Clinton, and Central Iowa and Illinois.

He says they’ve made multiple changes to adapt and this is another one. “We reached a point with you know the infrastructure, the need to have one IT system one billing system, one accounting system,” Brits says. He says they have worked for months to come up with a plan.

“That resulted in an agreement with Common Spirit Health which owns the Central Iowa Ministries and Trinity Health — which has ministries in Sioux City, Mason City, Dubuque, and Clinton. And both of them own half of health care. facilities in Waterloo and Elkader,” Brits says. “Now Trinity Health will take full ownership of the entire MercyOne system of care in Iowa.”

Brits says this was something that has been discussed for years — but was never thought possible.
“And yet here we sit today sharing this update with our 20-thousand colleagues in our communities, our providers, our physicians about how happy we are to be able to present a future plan that is wrapped around our concept of oneness,” according to Brits.

Trinity Health’s Mike Slubowski, says things have been operating well in the last 24 years and they are hoping to keep it that way. “There’s a point in time for every organization to evaluate how best to serve and is to Catholic systems we’ve found that this was the best opportunity for us to provide support for common platforms for future planning for other partnerships,” Slobowski says.

MercyOne’s Iowa network includes 16 medical centers and 27 affiliate organizations. The health system serves more than three-point-three million Iowans every year. Brits says they don’t expect this merger to save any money — but it could help improve the efficiency of the operations. The two non-profits will work together on the integration to Trinity and expect it to be completed this summer.