You are here: Home / News / More than 60 dogs and puppies taken from Keokuk County property 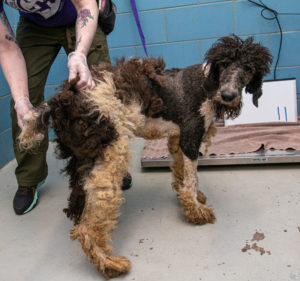 One of the dogs was rescued. (ARL photo)

Sixty-five dogs and puppies were rescued today from a property near Hedrick.

The Animal Rescue League of Iowa was alerted by law enforcement about the animals being moved from a puppy mill in Florida to Keokuk County. ARL director of animal services, Joe Stafford, describes the scene as “horrible.”

“A lot of the animals are thin, and underweight. They have various skin issues and dental issues. They all appear to have a very heavy parasite load of hookworms, whipworms, and different parasites that dogs have when they’re left untreated,” Stafford says.

Stafford describes one of the dogs that was rescued. “We found one animal, in particular, that was missing its lower leg and foot. And that did not appear to have been done by a veterinarian,” he says. Stafford says it will take some time for the dogs to recover so they can be adopted.

The Keokuk County Sheriff’s Office continues to investigate the case.