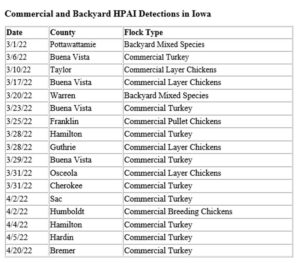 The Iowa Department of Agriculture says avian influenza has been confirmed in a commercial turkey flock in Bremer County.

Ag Secretary Mike Naig says it is the first case in the last two weeks. “I think, and we’re all hoping that what that means is that you won’t see the length of the outbreak be quite as long because you won’t have it moving from farm to farm,” Naig says. He encourages producers to remain alert.

The 30,000 turkeys at the Bremer County facility are being destroyed to prevent the virus from spreading. Naig says it’s unfortunate to see a new case after some hope that Iowa could be past bird flu for the year. “From an operational standpoint, certainly we have remained focused, we’ve known that this is going to continue to be a threat through the spring,” he says. “So really, I think all of us involved had the expectation that this would continue.”

This is the 17th bird flu case reported in the state and there are now 14 different counties with cases. Naig says the clock resets on the state’s ban on live poultry exhibitions. The state needs to go 30 days without a new bird flu case before events with live birds can resume.

(Katie Peikes of Iowa Public Radio contributed to this story.)