You are here: Home / News / Heavy winds do damage in Audubon 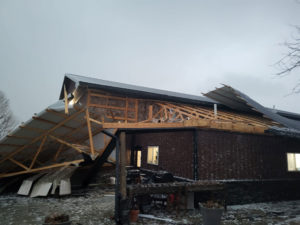 It was a foul start to the day for the owner of a pet grooming shop in southwest Iowa.

Risa Rugaard, owner of In The Dog House Boarding and Grooming, says her business had significant damage from storms that blew through rural Audubon around 6:30 this morning.

“Well, the wind had started to come up and I had just got back in the building,” Rugaard says. “I went outside to grab some stuff that was blowing around and then it got really black out and next thing I knew, the roof was laying in front of my doors.” It all happened “really quick and really loud” she says. While the building’s roof was torn off, neither she nor any of the animals were hurt.

There were no warnings issued for Audubon County. Rugaard says the sudden storm took her, and her husband Kevin, by complete surprise. “My husband had just left for work and he just got to Audubon and I called him and told him the roof was gone and he was like, ‘What?!'”, Rugaard says, “so he definitely hadn’t driven into anything that was crazy.” The wind event apparently followed a straight line through the area.

“Nothing else on our property has even moved,” she says. “I mean, we’ve got an empty bucket over by our chickens and it’s in place.” The roof damage is extensive, and it’s unclear how long it will take to fix. Adding insult to injury, rain fell inside the building. They’ve owned the dog grooming and boarding business for three years, though Rugaard has been grooming animals for more than 30 years.