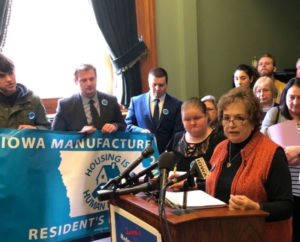 Candi Evans of North Liberty is co-chair of the Iowa Manufactured Home Residents’ Network. She says the bill didn’t address any of the group’s five priorities.

“Legislators said as they began to work on this that they were anxious to balance the power of ownership between the landlords and the residents, the homeowners. That did not happen. They gave more power to the landlords. And they took away more from us,” Evans says.

Evans started pushing for change when an out-of-state company bought the mobile home park she lives in and significantly raised the rent. “We only want to save our home. We are not asking for anything that we have not earned on our own,” she says.”We are asking that they help us so it’s not taken away from us.”

Republican lawmakers say they wanted to do more — but this bill is a step forward in protecting Iowans who live in mobile homes. But Democrats and Evans say the bill will make things worse for residents. Evans made her comments today on the Iowa Public Radio program “River to River.”