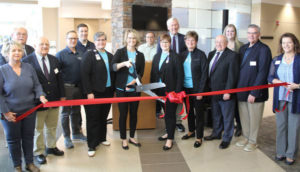 Hundreds of people attended the weekend ribbon-cutting and open house for the new UnityPoint Health-Marshalltown Hospital. It’s the result of a $38.4 million expansion of the existing medical park on the south edge of town.

Jenni Friedly is the facility’s chief operating officer and vice president. Friedly says, “We’re really excited about the design of this new health care facility in Marshalltown, the newest hospital in Iowa and hopefully, we’ll hold that title for a long time.” Friedly says the new hospital has been a long-time priority for Marshalltown.

“We really did a lot of digging into how to build a new, efficient, sustainable health care system for the community and we’re excited to show that off,” she says. “We built flexibility for health care in Marshalltown so we can continue to serve.” UnityPoint Health’s support services began moving into the new facility on April 21st, while the remaining departments are expected to make the move in today  through Wednesday.