You are here: Home / Agriculture / Warmer weather needed before planting can begin 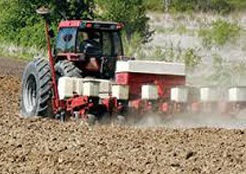 Farmers are anxious to get out and plant. (file photo)

While we’re more than a month into spring already, weather and soil conditions have been far from ideal for Iowa farmers to do much in the way of spring planting.

Angie Rieck-Hinz, a field agronomist with the Iowa State University Extension in north-central Iowa, says a few farmers have started the process, but not many. “We want to be patient,” Rieck-Hinz says. “Our soil temperatures are still not where we would like them to be for planting. The rest of the soil conditions aren’t too bad. It’s not overly wet.”

Temperatures this past week rollercoastered from the 20s to the 70s, and a weekend ago, parts of Iowa got more than four inches of snow. The spring season officially arrived back on March 20th so Rieck-Hinz says it’s no surprise farmers are getting itchy to fire up the tractors.

“We’ve had such nice springs the last couple of years,” she says. “In fact, 2018 was the last time we hadn’t had major corn planting progress by the third week of April, so I can understand why everybody’s a little antsy.” Recent rains have helped to recharge soil moisture levels in parts of the state that were slipping into drought conditions a year ago.

“We’ve been through two relatively dry summers now,” she says. “Our soil moisture availability is a little bit higher now. That’ll help us going into the spring if it dries out a little bit more. Otherwise, things look pretty positive going forward in time.”

Rieck-Hinz says farmers need to wait for good conditions before putting corn into the ground so it has a good chance of getting out of the ground, adding, even emergence leads to a more consistent yield.