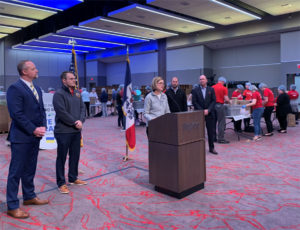 Meals from the Heartland has sponsored a “Unite for Ukraine” event to produce an estimated 300,000 packaged meals.

Several legislators, the governor and her staff and other members of the general public took shifts at HyVee’s conference center in West Des Moines over the past two days, standing along assembly lines to scoop up ingredients into bags. Meals from the Heartland executive director Greg DeHaai said hundreds of volunteers joined the effort.

“As you may heard, recently it’s been reported as many as five million Ukrainians have fled the country. This is about equivalent to the states of Nebraska and Iowa having their people flee those states,” he said, “not to mention the people in the country of Ukraine impacted by the ability to have their basic needs met.”

After the war started, DeHaai said his organization started getting questions about how to help Ukraine, but couldn’t figure out the logistics.

“Fortunately, prayers were answered when Governor Reynolds and her staff were able to arrange for the air cargo freight of 24 pallets through the Ukrainian Consulate in Chicago,” DeHaair said. “I’m also happy to announce that Fort Dodge based Decker (Truck Line) will be transporting the meals…at their expense to Chicago…They’ll be flown into Poland and into Ukraine on May 7.”

HyVee donated $50,000 to cover the cost of the ingredients for “Taco Mac” and “Hearty Pack” meals.

As DeHaai spoke at a news conference, you could hear the scooping in the background as volunteers filled the meal bags. Each box of 36 meal bags includes a note of encouragement, from Iowa to Ukraine.