You are here: Home / Fires/Accidents/Disasters / Students in Sioux City get live training in bin rescue 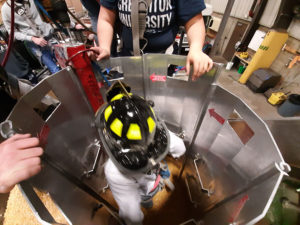 Sergeant Bluff Fire Chief Anthony Gaul was one of the instructors. “So we’re gonna be able to get to a lot of kids in our community that are around farming around ag and teaches them a little bit of safety that hopefully, they’ll get here and never have to experience for real,” Gaul says. Instructors from the National Education Center for Agricultural Safety brought a trailer with a grain bin simulator that a student volunteer became “trapped” in.

Gaul says other students in turnout gear then had to rescue their classmate using a grain auger and other tools. “I’ve been on three of these for real and we’ve been successful with two of them. And it’s a frightening situation for anyone to be in — the person that’s in the bin, the family,” Gaul says. “The state has done a good job of helping provide training. There have been grants for equipment to bring us to where we need to be.”

Keyshawn Canady is one of the high school students who volunteered to be the victim in the training exercise.”For a second, I’m not gonna lie to you it was a little terrifying but then after a while, it was nothing. Yeah, in real life I maybe would have been absolutely shocked. But no, not now. No, I’ve never been in like a simulation with that no,” Canaday says.

Canady says the experience and class training he is taking has sparked his interest in becoming a firefighter. “I really didn’t know too much about firefighting but I’m actually going to continue it and go to WIT (Western Iowa Tech) for two years for fire science,” he says. The students also received training in “stop the bleed” activities with staff from local hospitals.