You are here: Home / Business / Iowa company honored by SBA for its focus on helping other businesses to shine 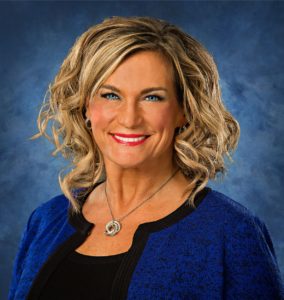 Anytime you see a ground-breaking or a grand opening on TV, do you ever wonder where those golden shovels or giant scissors for ribbon-cuttings come from?

They were likely purchased through a central Iowa company whose founder is being named the Iowa Small Business Person of the Year by the U.S. Small Business Administration. Kimberly Baeth is president and owner of Golden Openings of Urbandale.

We are a preferred vendor for the White House. We do things for Oprah, Disney, Fortune 500 companies, colleges, universities — those are some of our main repeat customers,” Baeth says. “We grew 32% every year for 24 years. Last year we did 84%, phenomenal growth.”

The company was founded in 1991 as a one-stop-shop for ceremonial products for grand openings, ribbon cuttings and ground-breaking events. Over 25 years, Golden Openings has helped tens of thousands of businesses open their doors and make an impact in their communities.

Before venturing off on her own, Baeth was working for a chamber of commerce when a new business asked for help with a ribbon cutting ceremony, but there were no giant scissors to be found.

“I had my dad make a pair of wood scissors with razor blades that met and then our chamber phones started ringing off the hook. We couldn’t keep them in stock,” Baeth says. “We had Target wanting a pair of red and white ones. We had General Mills wanting a pair with all their logos and their cereals on it. Other chambers were calling to borrow them and they were dangerous. You could get cut, it just was crazy, but the demand was so high so I knew this could be a business.”

While the Iowa business offers some 20-thousand ceremony-related products, things like balloons, banners, red carpets, shovels and hard hats, those specialty scissors remain one of the top sellers.

Golden Openings has 14 employees and has done business on every continent on the globe but one, and Baeth says she’s working to change that by supplying the ribbon and scissors for a marathon foot race on Antarctica. Baeth will represent Iowa at National Small Business Week activities next week.